Over the past several days, artist Jonathan VanDyke has spent 40 hours looking at the Jackson Pollock painting Convergence, 1952 at the Albright-Knox Art Gallery in Buffalo, in a performance he calls The Long Glance.

Here are a few notes I took while watching a live feed of the performance.  The feed was configured as a series of changing still images, pulsing into view every second or so. 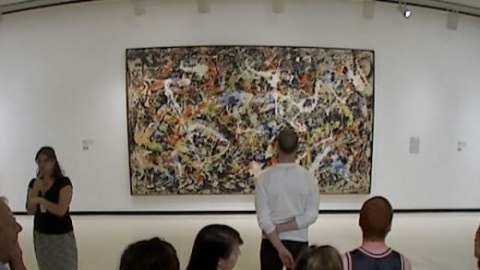 When I looked this morning, VanDyke was alone with the painting.  He stood to the left of it, arms folded, very still.  He tilted his head once, rolled his feet outwards.

I tune back in when I get to the studio, and I see he’s surrounded by a group.  A young woman to the left, gesturing.  Ah, a docent tour.   The group looks at the painting, looks at Jonathan looking at the painting

White long sleeved shirt, dark pants.  Closer to the camera you can see the whiter outline of his undershirt.

He’s alone for a while.

Then another crowd comes in.  This group stands between him and the painting, looking at the Pollock. They give VanDyke a glance or two, but mostly go right up to the Pollock and look at its details.  An older gentleman stands to the right with a cane. Then they’re all gone, a flock.  He is alone, hands in his pockets, weight on one leg. A casual look of looking.

It feels intimate, watching him watch. He sheds the VanDyke, becomes Jonathan.

He stretches for a second, hugs himself, put his hands back in his pockets.

Two women stand next to the painting, looking with him.  Much longer than the average time a visitor spends with a painting, but still, after three or four minutes they’re gone.

Now his hands are on the small of his back, elbows akimbo.

I check back in, no Jonathan. I’m glad, actually, that he gives himself some breaks. Short ones, though – here he is, walking back into the screen.

Arms folded, as if he never left.

He’s to the right of the painting, left arm at his waist.

A group of school kids, many with matching black T-shirts.

Today Jonathan is in a gray shirt with a white collar, arms folded, mid painting. The kids vanish & he’s alone.  His arms drop to his sides. He shifts his weight to his right leg, puts his left hand in his pocket.

Truly, he looks like he’s just standing there looking at the painting. The kids reappear from the right side of the frame, stand around him again.  Almost like it’s a time loop. A teacher in blue is explaining things about the Pollock, gesturing right and left.

Jonathan’s arms are by his sides again, then folded.

I get some coffee, come back, a man with a thick black ponytail is in the frame, behind Jonathan, obscuring him.

He leaves and Jonathan rests his hands on the small of his back, seems to lean back, then relaxes into his contrapposto.

Mid painting.  One hand holding his elbow behind his back. Legs spread a bit. The kids from earlier wander back through. They’re looking at him more than looking at the painting now.  One girl plays with a strand of her hair. 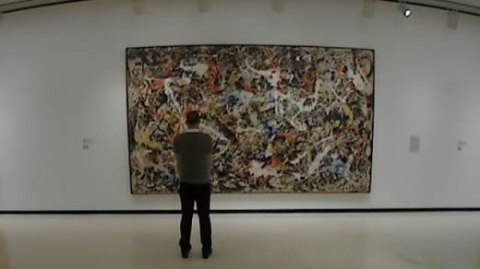 Arms akimbo, hands at his waist.

A woman stands with him off to the right, black T-shirt, khakis, dark hair, arms folded.  A companion. They look together.  A shared experience.  But then she disappears, one frame she’s there, the next gone.

Skinny girl with a long lensed camera taking a close up of the wall text on the right – I’m guessing this is the text to Jonathan’s work.  She bends forward into the frame.

He stretches his arms down, then relaxes them at his sides.

I sense now a feeling of endurance, a feeling of really waiting and waiting it out.  He moves his neck to the right, stretching it with his hand.  Walks in a little closer to the painting.  Stays there, hands in his pockets, shifting subtly from foot to foot.  He folds his arms, almost seeming to be hugging himself.

This close in some ways he seems part of the painting, part of its composition.  The brown of his neck, the gray of his shirt, his white collar, the darker swirl of his hair. And in some sense maybe he is part of the painting.  Where, exactly does it stop in our experience and where does he begin?

It’s a colorful Pollock. Orange trails, yellow and blue blotches, the khaki of unprimed canvas, black veins and threads, and over it all big white exuberant splashes.

One foot angling to the left.  Weight into his right hip.

The painting, of course, moves much more than he does.  And yet, on another plane, he, even at his most still, moves more than the painting.  An it and a him. We are invited to compare. It’s impossible not to think of those iconic pictures of Pollock bending over his canvas with a bucket of paint. Cantilevered out over the work like a dancer. All that sturm und drang and romance met with the simplicity, stillness, even dumbness of Jonathan’s gesture.

Now he’s edged forward so his whole body is in the frame.  The room seems darker.  His body tensed.

The closer he stands, the more his colors and shapes become part of the work.  The bottom of the painting now exactly matches the line where his T-shirt meets his jeans.  He’s off center, near where I first saw him, to the leftish.

Way off to the right. patient, patient. He closes with the painting.  Shifts his weight to the left.  Brings his feet together, then apart again. Crosses one foot over the other. Still, yet restless. Every couple of frames there’s a slight movement. For some reason, I feel at this moment that he’s really looking. Looking hard at the painting. Or making himself look.

How much can we know or extrapolate from tiny shifts of posture what a person is thinking or feeling?

He tilts his head to the right. Crouches down to the floor and squats. The difficulty of simply standing.  Standing as dance. But at a glance, he’s just squatting to look.  He stands, then squats again, then stands.  Now with right foot forward, hand on his back hip. Every standing pose is a classic of one kind or another. It’s hot here, where I am, and I wonder if it’s hot there.

He lifts his shirt, and I glimpse for a moment his white undershirt.

Legs crossed, front foot tilted on its side.

The painting will, inevitably, outlast him.  Out-endure him.

Someone walks by quickly, an older woman. He steps back legs apart (hips width apart, I hear a yoga instructor say in my head).  He steps back to the middle of the canvas.

He’s been alone most of the afternoon.

What exactly is a vigil? Why attend like this.  To attend, to wait upon.  To be ready for something.

I know he’s gone, but I look anyway.  The room is noticeably dimmer, the video grainer and yellowed in the low light. I watch the painting pulsing in and out of view.  It loads more often now, maybe because I’m the only one watching. Watching now that he is gone.

Hello Jonathan.  He’s alone.  White T-shirt, hands in his pockets, weight resting on the right hip. Medium distance from the painting. Very still. He tilts his head up slightly, then neutral.  A older woman in a navy jacket walks behind him, stops to read the wall text.  She walks up to the center of the painting, very close, cranes her neck to peer upward.  Then she circles around behind Jonathan, gives him a glance, disappears.

Now his arms are folded. Weight on the left hip.

I have work to do. I should look away. But strangely enough I am compelled.

Now he pushes his hands down into his pockets, shrugs his shoulders up a minute, keeps his arms straight against his body.

This seems a little flirty. And I think of the painting looking back at him.

Three women watching with him, slightly behind, looking at the painting with tilted heads.

He’s off to the far right, right hand behind his back, holding his left elbow, legs apart, weight to the right.

The women talk to each other. One leaves.  The two that are left tilt one way, then the other.

Jonathan holds his hands behind his back.  He looks ready. Ready for what?

One woman imitates his pose. The other puts her hands in her back pockets.  The move and shift and move again.  He is still.

[ More on Jonathan VanDyke in follow-up to this post here: Action: Inaction Painting ]

§ 2 Responses to Action: Watching the Watcher

You are currently reading Action: Watching the Watcher at Word Object.